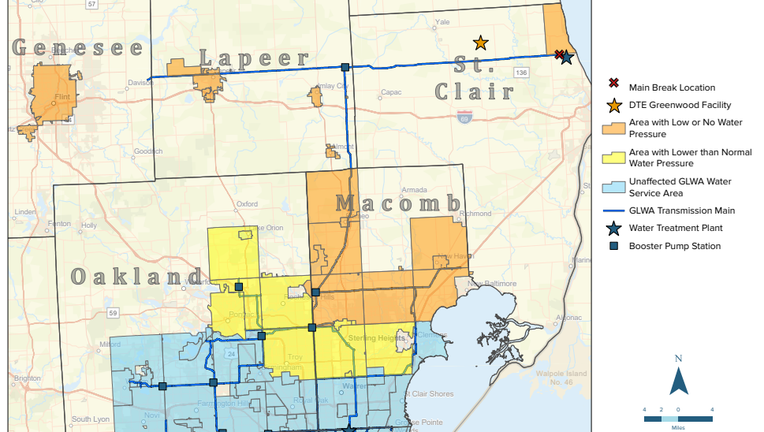 An estimated 935,000 were affected by a water main break at the Great Lakes Water Authority’s Lake Huron facility.

The GLWA is working to isolate a break on the 120-inch water transmission main; the largest in the regional water distribution system. The leak was found in the early morning hours on Saturday.

The location of the leak has been found approximately one mile west of the GLWA’s Lake Huron Water Treatment Facility. Crews are working on isolating the area so that they can start repairs.

Emergency connections to other mains in the system will be opened once the leak is isolated, said the GLWA.

A precautionary Boil Water Advisory had been issued for the following impacted communities:

“Based on further review of GLWA’s water pressure data, it does not appear that water pressure in these communities fell below the 20psi threshold for declaring a Boil Water Advisory,” GLWA said in a statement.

The City of Romeo has been added to the precautionary Boil Water Advisory, according to GLWA.

Residents under the Boil Water Advisory should not drink water without boiling it for at least one minute and then letting it cool, said the GLWA. Boiled, bottled or disinfected water should be used for drinking, making ice, washing dishes, brushing teeth, and preparing food until further notice, according to the advisory.

“Whenever a water system loses pressure for any significant length of time, precautionary measures are recommended since a loss of pressure can lead to bacterial contamination in the water system,” said the GLWA. “Bacteria are generally not harmful and are common throughout our environment. Boiling water before using it will kill bacteria and other organisms that may be in the water.”

The cause of the water main break is still under investigation.

Updates will be provided as information becomes available.

Stay with FOX 2 for updates

Steelers rookie Pickett up to QB1 on depth chart

‘It’s never, ever OK to be a racist,’ Rick Scott says when asked about Trump’s