Has Gasoline Price Shock Triggered Demand Destruction Yet? And Where Will Gasoline

There’s some demand destruction. But oil bounced again, gasoline might be next. My guess is a long-drawn-out zigzag higher.

Following the dizzying spike in gasoline prices, the question arises when demand destruction will set in, where people start driving less, start taking it easier to conserve gas when they do drive, or start prioritizing the most economical vehicle in their garage. If enough people do it, demand begins to decline, and gas stations have to compete for dwindling business. Demand destruction is what would cause the price to come down again. Are we there yet?

The Energy Department’s EIA measures consumption of gasoline in terms of barrels supplied to the market by refiners, blenders, etc., and not by retail sales at gas stations. The volume of gasoline supplied has fallen for the third week in a row. This is unusual this time of the year, when gasoline consumption normally rises through the summer. 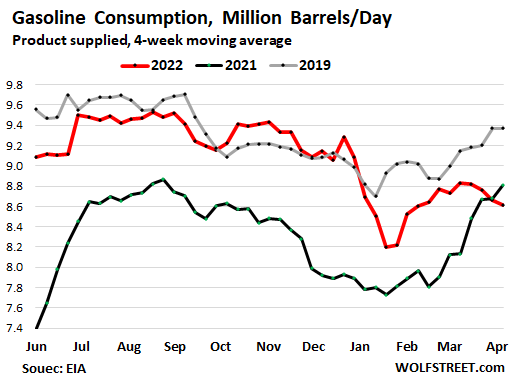 Consumers began to react in January.

Note how the past 11 months (red line) tracked the pre-Covid period three years earlier very closely (gray line) until they began to diverge sharply, not just in March, but already in mid-January, and have been solidly below the 2019 level ever since.

Gasoline prices started shooting higher from collapsed levels in April 2020. By May 2021, the average price of gasoline, all grades combined, breached $3.00 a gallon, a multi-year high, and kept going. In November 2021, it hit $3.40 a gallon and took a break. Then in early February, it started spiking higher and in historic leaps hit $4.32 on March 14.

But since mid-March, the price has ticked down. Now at $4.09, it remains nosebleed high but is a little lower than it was: 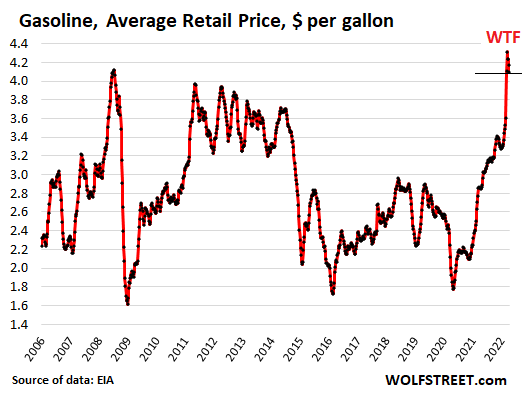 Gas stations don’t lower prices out of the goodness of their heart. They lower prices because sales are getting hit, and price competition has set in among gas stations in an effort to maintain sales volume. And gas stations could lower their selling price without taking a hit to their profit margins as the costs of their product also declined.

Demand destruction that hits gasoline would then be passed through to crude oil demand. But crude oil has far broader uses than just gasoline, including the booming petrochemical industry. And a small decline in demand for gasoline in the US isn’t going to shake up the global crude oil markets all that much.

Crude oil grade WTI had spiked to $130 a barrel and then fell back into the mid-$90 range. In recent days, it has changed course again and hit $106 now. This is not a good sign for gasoline prices.

Clearly, there has been some demand destruction, and perhaps this was enough to cause the price of gasoline to come back down a little.

But maybe it wasn’t. Maybe this demand destruction wasn’t the cause of the decline in gasoline…

Read More News: Has Gasoline Price Shock Triggered Demand Destruction Yet? And Where Will Gasoline

Expert picks and betting tips for the 2022 U.S. Open