A slow-moving central section of the 800-mile San Andreas Fault line in California could play host to much larger earthquakes than previously thought, according to a new study.

Situated between Parkfield and Hollister, the section undergoes aseismic fault, with two sides of the fault moving imperceptibly slowly, releasing stress over time without causing a large earthquake.

Whereas the main two sections sit, almost unmoving, grinding against each other slowly building up energy – until one day it comes out as a giant earthquake.

However, a new study by Columbia University’s Lamont-Doherty Earth Observatory in Palisades, New York, found that this slow-moving region is also capable of producing large earthquakes on a similar scale as those elsewhere on the line.

They discovered this by looking back through the geological record for the fault, and found it has experienced earthquakes of magnitude seven and higher, which is on a par with the 1906 quake that destroyed San Francisco – the late ‘Big One’.

The monster San Andreas Fault splits California from south to north, caused by two tectonic plates slowly grinding against each other over 800 miles.

This new discovery will only add to the risk of a ‘Big One’ happening, as many believe the region is long overdue for a quake on the scale of the 1906 event. 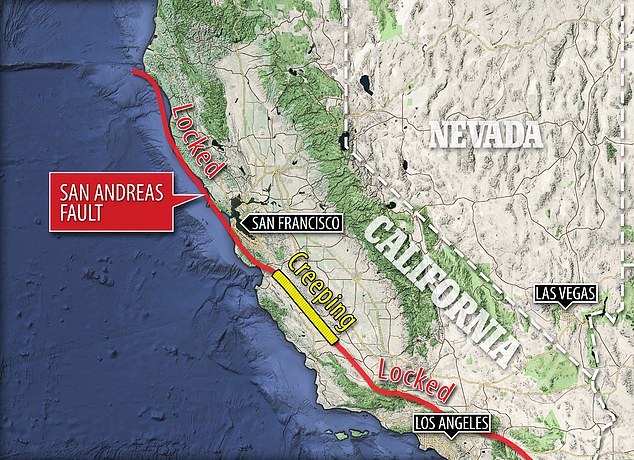 A new study by Columbia University’s Lamont-Doherty Earth Observatory in Palisades, New York, found that this slow moving region is capable of producing very large scale earthquakes on a similar scale as those elsewhere on the line 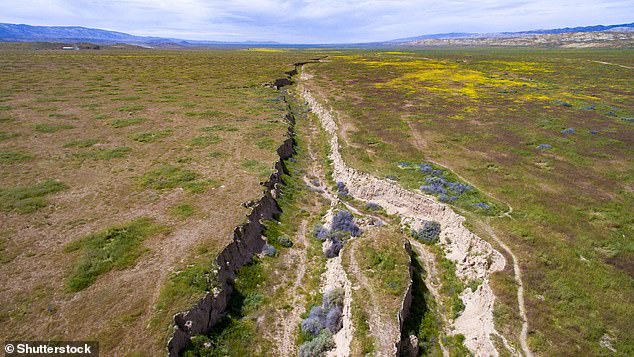 The monster San Andreas Fault splits California from south to north, caused by two tectonic plates slowly grinding against each other – always on the edge of producing ‘The Big One’ – a large scale earthquake that would cause death and destruction. Stock image

Genevieve Coffey, an earthquake geologist at GNS Science in New Zealand, who did his undergraduate study at Columbia, examined the three sections of the fault.

Each of the three sections can move independently, and in each case they are trying to move past each other in opposite directions.

In the most southerly and northerly sections of the fault, the plates are locked most of the time, stuck together in an immovable embrace, that causes stress to build up over years, decades and centuries that ‘has to come out at some point’.

When it finally releases this built up stress, it results in violent earthquake, caused by the two sides lurching past each other after years of being stuck.

The central section is different – it sits between these two unmoving zones – and in this middle area the plates slip past one another at a steady 26mm per year, preventing extreme stresses from ever building up.

At least that has been the case as long as humanity has been monitoring this section of the San Andreas Fault. But the latest theory suggests it poses just as big of a risk as the static portions of the fault line.

Rocks drilled and removed from two miles below the surface suggest the central section has hosted many major earthquakes throughout history.

Some could have been fairly recent, at least within hundreds of years, rather than millions, according to the…

Florida residents can now enjoy restaurants and bars without restrictions, but Miami