Even on Glorious Friday, the second day of a big rally after five days of sharp declines, the shares of a real-estate “tech” stock, house-flipper Opendoor, collapsed 23%, after having already collapsed in the months before.

Opendoor Technologies [OPEN], on Thursday evening, had reported a loss of $191 million for Q4, which brought its net loss for the year 2021 to $662 million, which brought its total losses for the four years that have been publicly disclosed to $1.5 billion. How can a house flipper lose $1.5 billion in four years? I don’t know either. But it isn’t over yet. And the company ended the year with an inventory of 17,009 unsold houses.

Opendoor went public in December 2020, at the IPO price of $31.47 amid enormous hoopla. By February 2021, shares had reached $39. If “February 2021” sounds familiar, it’s because that’s the month the stock market started coming unglued beneath the surface as highfliers started collapsing one at a time, each on its own schedule. The damage was such that I started reporting on it in May 2021. And this is just another chapter as it just keeps getting worse. On Friday, she shares closed at $8.44, down 78% from the February 2021 peak and 73% below its IPO price (data via YCharts): 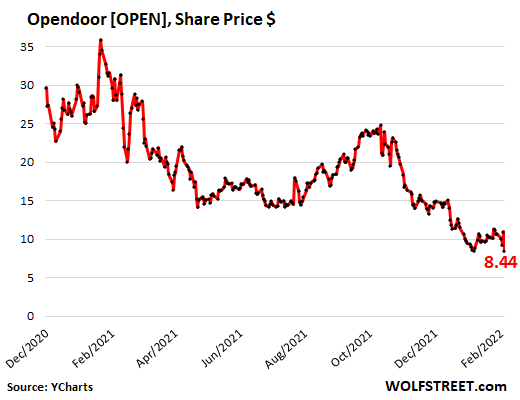 Opendoor financed this inventory with $6.1 billion in “non-recourse” debt backed by its houses. Non-recourse means if Opendoor defaults, its lenders get the house and cannot go after Opendoor’s other assets. If Opendoor cannot sell those homes and pay off the debt with the proceeds, it can hand the properties to the lenders and let them worry about selling the homes.

In addition, Opendoor was under contract to purchase 5,411 more homes for $1.9 billion.

Zillow did the same thing with a big portion of its 7,000 homes that were stuck in the pipeline before it quit the business last November and sold those homes mostly to institutional investors, who’re now trying to figure out what to do with them. These homes that are stuck in the house-flipper pipeline and that are shuffled around are vacant, but don’t show up as vacant, and they are not for sale, and don’t show up as “supply.”

House-flipping is easy – the first part, buying the house, when money is no objective, and your algo can spend as much as it wants. The rest is hard, and making money at it is even…