Long Covid sufferers may have hidden lung damage, a small study in the UK has suggested.

Scientists supported by the Oxford Biomedical Research Centre used a xenon gas scan to pick up abnormalities in the lungs of those suffering from breathlessness after having Covid.

The study uses the odourless, colourless, tasteless and chemically non-reactive gas, to investigate possible lung damage in the patients who have not been admitted to hospital, but continue to experience the symptom.

The initial results of the study suggest there is significantly impaired gas transfer from the lungs to the bloodstream in the long Covid patients despite other tests – including CT scans – coming back as normal. 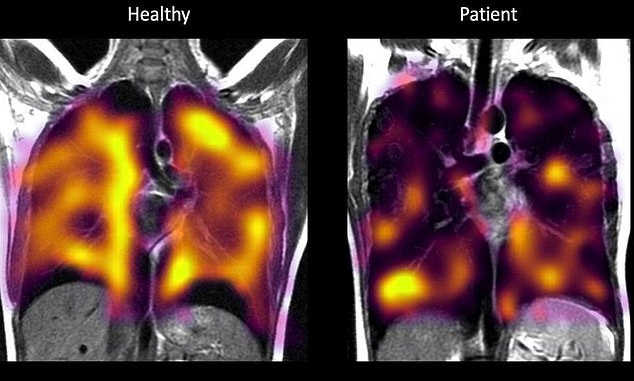 A larger study has been commissioned to confirm the results of this small sample.

Lead researcher Dr Emily Fraser told the BBC the study had been borne out of frustration of medical professionals who could not find clinical reasons for the breathlessness using X-rays and CT scans.

Dr Fraser said: ‘This is important research and I really do hope this will shed more light on that.

‘It is important people know that rehabilitation strategies and breathing retraining can be really helpful.

‘When we see people in clinic who are breathless we can make progress.’

The method and clinical applications were developed by Professor Jim Wild and the Pulmonary, Lung and Respiratory Imaging Sheffield (Polaris) research group at the University of Sheffield.

Prof Wild said: ‘Xenon follows the pathway of oxygen when it is taken up by the lungs and can tell us where the abnormality lies between the airways, gas exchange membranes and capillaries in the lungs.’

Co-chief investigator of the study, Prof Fergus Gleeson, told the BBC: ‘There are now important questions to answer, such as, how many patients with long Covid will have abnormal scans, the significance of the abnormality we’ve detected, the cause of the abnormality, and its longer-term consequences.

‘Once we understand the mechanisms driving these symptoms, we will be better placed to develop more effective treatments.’

Xenon gas is visible on scans unlike oxygen which means it can be used to track how well lungs are moving the gas around the body.

Gas transfer was noticeably less effective in the Long Covid patients than their healthy counterparts.

The paper has not yet been peer-reviewed and thus should be treated with skepticism.

The ONS calculates 506,000, 40 per cent, have suffered the wide-ranging condition called Long Covid for over a year.

The estimates are based on a survey of 350,000 people who self-reported suffering with Long Covid, meaning they were not necessarily diagnosed.

These responses were collected in the four weeks to December 6, before the recent surge in Covid infections driven by the Omicron variant.

Britain’s Covid cases continued to fall today by 5.3 per cent in a week, official figures show as the Omicron wave recedes across the country.

UK Health Security Agency (UKHSA) data show there 72,727 positive tests over the last 24 hours, down from the 76,807 recorded last week. 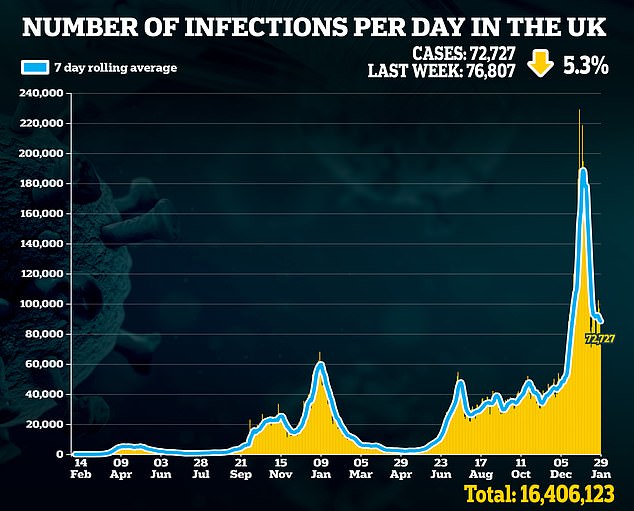 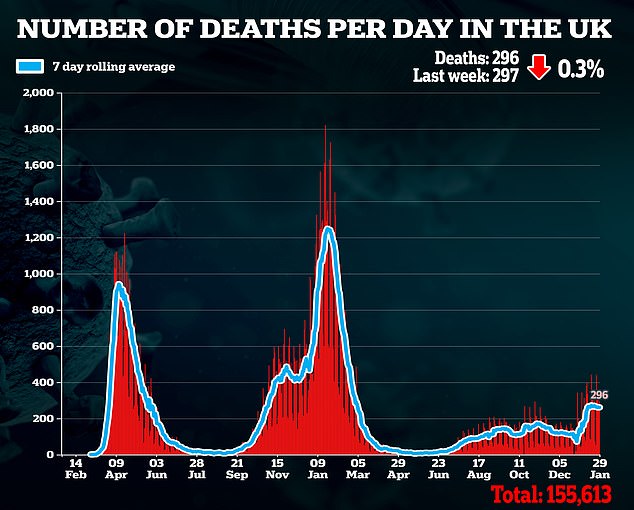 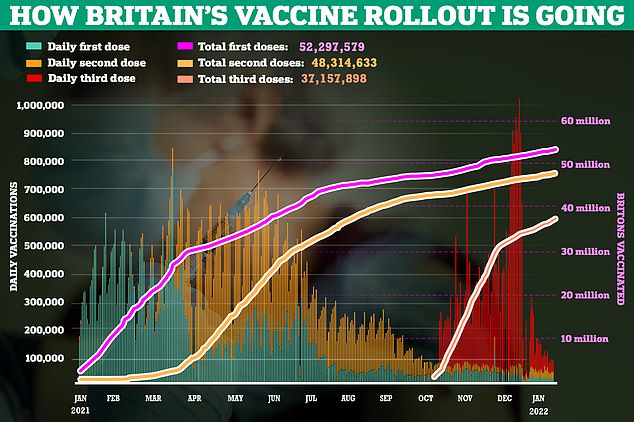