Meghan Markle has revealed a new image of her and husband Prince Harry‘s two-year-old son Archie.

In the image, the little boy is seen feeding chickens in the garden of his parents’ $19million home in Montecito, California, whilst wearing jeans, a grey t-shirt and yellow Peppa Pig Hunter wellies.

The photo, which does not show Archie’s face, was shown to viewers during Meghan’s wide-ranging interview with US tv host Ellen DeGeneres on Thursday.

It is the first time Archie has been seen since the Duke and Duchess of Sussex released a photo for his second birthday in May.

That image also shielded Archie’s face from view, as did one which was released to mark International Women’s Day in March.

In the wide-ranging interview with DeGeneres, Meghan opened up about her domestic life with Harry, Archie and five-month-old daughter Lilibet, whilst also renewing her calls for paid family leave in America.

Harry and Meghan have not yet released any images of their daughter, who was born in Santa Barbara in June and is yet to meet the Queen or any other members of the royal family. 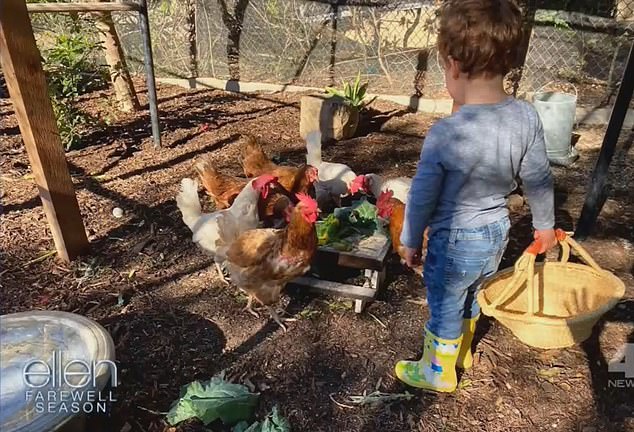 Meghan Markle has revealed a new image of her and her husband Prince Harry’s two-year-old son Archie. In the image, which was revealed to viewers on the Ellen Degeneres chat show on Thursday, the little boy is seen feeding chickens in the garden of his home in Montecito, California

Speaking of her family life, Megan told DeGeneres that Archie ‘loves being a big brother’ to Lilibet and added that he ‘loves to dance’.

She said she ‘loves to cook’ and will be at home with Harry and her children for Thanksgiving, which ‘will be nice’.

She also opened up on the challenges of raising children, saying: ‘Someone told H (Harry) and I that when you have one kid it’s a hobby, and two children is parenting.

She added that Harry ‘loves’ the weather and lifestyle in California. 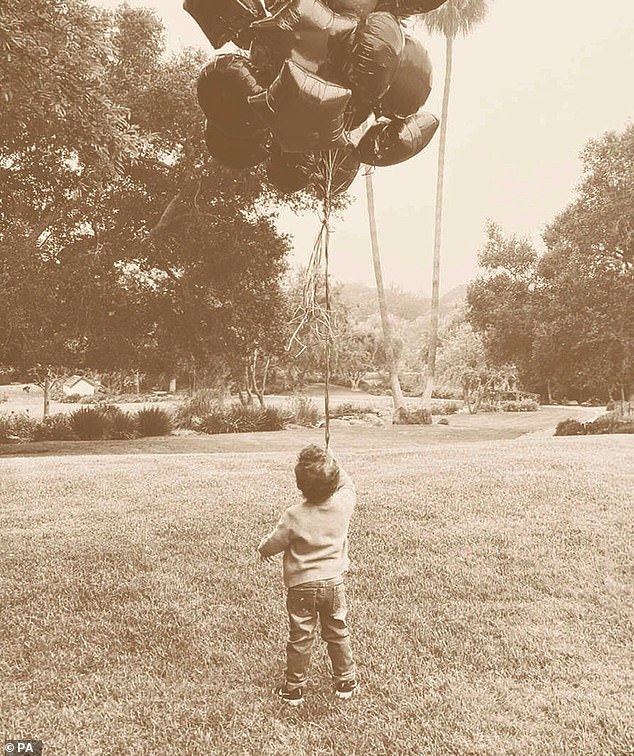 It is the first time Archie has been seen since the Duke and Duchess of Sussex released a photo for his second birthday in May. That image (above) also shielded Archie’s face from view

On the subject of paid parental leave, Meghan told close friend DeGeneres that she would do ‘everything’ in her power to make paid family leave law for all Americans.

The duchess recently stepped outside of royal protocol with a letter to US Congress asking them to consider making the proposal compulsory.

However, she has come under fire for calling Republican senators and using her royal title to urge them to vote in favour of paid leave.

Republican Representative Jason Smith of Missouri, who has previously condemned Meghan for interference in American politics, even suggested she should be stripped of her title to stop her using it to gain…

Meat Loaf, ‘Bat Out of Hell’ Singer and Actor, Dies at 74

Cheers! NY moviegoers can now grab beer or wine with their popcorn

Rising to Steph’s challenge, Luka Doncic puts on a show in Mavericks’ win

Sources: Ravens-Steelers still on for Tuesday

Companies kicked off U.S. exchanges will just list their stocks in China, consulting