You really CAN age overnight! Factors that can rapidly accelerate physical and mental

The idea of ‘ageing’ overnight after a traumatic event sounds like a figure of speech — it was famously expressed in relation to Marie Antoinette, the last Queen of France.

Her hair allegedly went white the night before she was executed by guillotine during the French Revolution, aged 38.

Yet research has now shown that going white overnight and other forms of rapid ageing are a biological fact.

A U.S. study found that new mothers who had less than seven hours’ sleep a night in their baby’s first six months were biologically three to seven years older than those who had seven or more hours’ rest, as reported in the journal Sleep Health last month. 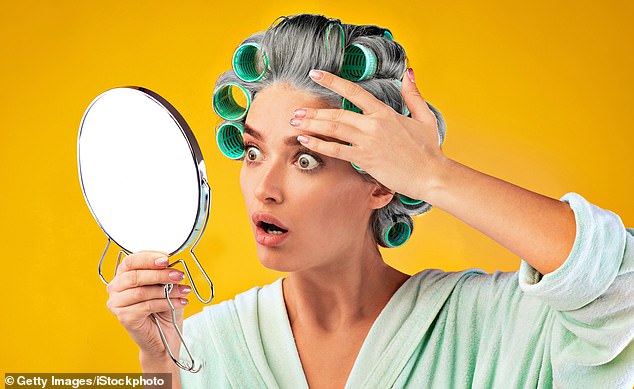 The researchers, from the University of California, Los Angeles, looked at 33 new mothers aged 23 to 45, measuring the length of their telomeres. These are DNA structures found at the end of chromosomes that are seen as a marker for biological ageing (more on this later).

It’s not known whether these effects are long-lasting in women, but this latest finding adds to a body of research that shows ageing can speed up, sometimes dramatically.

Some of the factors behind ageing (essentially, gradual damage to the cells) are the familiar culprits — smoking, drinking excessively, being overweight and inactive — which account for about 9.2 per cent of ageing. Adverse life events, such as unemployment, loss of a child or being diagnosed with a terminal illness accounted for another 9 per cent, according to a study of 2,339 adults aged 50 and over by Yale University in the U.S., published in 2019.

The researchers determined biological age — a reflection of what is going on at a cellular level — by measuring a range of markers in the blood including white blood cells, which are part of the immune system. Normally, immune function falls with age — how well it is working is one indicator of biological age.

Genes played the most important determining role, the scientists found.

However, while Peter Joshi, a geneticist and Chancellor’s fellow at the University of Edinburgh, agrees that genes play a role, he says lifestyle and life events can be far more influential.

‘Anyone who has been to a school reunion from the age of 40 onwards will know that we all age at a different rate — whether it be facial wrinkles, body shape, the degree of hair loss or greying of hair,’ he says.

We asked leading experts about the factors that can speed up ageing, whether over a relatively short space of time or longer-term changes — and tips on how to counter the effects.

This is what they told us….

Why hair goes white with shock

A gradual greying of the hair — due to a loss of the pigment melanin that provides its colour — is a common sign of ageing.

But for some, especially those who have experienced shocks or traumatic life events, the process is anything but gradual — a condition known to dermatologists as Marie Antoinette syndrome.

It is, however, rare (and takes more time than just overnight), but thanks to a study published in the journal Nature in 2020 we have a clearer idea of its…

Read More News: You really CAN age overnight! Factors that can rapidly accelerate physical and mental

Monkeypox Vaccine: Where to Get It