At the current rate of outflows, the out-of-money date is in mid-October. “Extraordinary measures” might extend it into November.

The balance in the US government’s checking account, the Treasury General Account (TGA) at the Federal Reserve Bank of New York, plunged by $240 billion since the end of July, to $297 billion, according to the Fed’s weekly balance sheet.

On August 1, 2021, the amount of the gross national debt outstanding, a monstrous $28.43 trillion, became the “debt ceiling” that cannot be breached until Congress raises it, suspends it, or changes the definition of what “debt” means, as it has done 78 times since 1960. The government is now paying for the deficits, not by issuing new debt, but by drawing down the TGA and by using “extraordinary measures” (more on those in a moment).

At the rate of decline since August 1, the TGA balance will hit zero near mid-October. This out-of-money date could be extended by “extraordinary measures” into November, which is when the US government would begin defaulting on its bills: 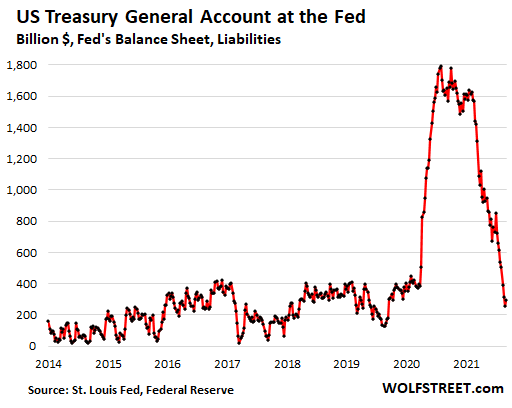 The TGA has been through huge gyrations. In the spring 2020, the Treasury Department issued $3 trillion in new debt to fund the biggest stimulus and bailout programs in history, but spent only part of it, and the TGA ballooned to $1.8 trillion by July 2020. In January 2021, the Treasury Department began drawing down the TGA by reducing the amounts it borrowed to bring it back to the normal range by summer.

During the “Debt Ceiling Farce 2017,” just before Congress lifted the debt ceiling, the TGA had only $39 billion left in it.

Given how huge the daily US outlays are, that was uncomfortably close to zero. This time around, the outflows are vastly greater, and associated with much more uncertainty.

So now we get to watch “The Debt Ceiling Farce 2021,” as it unfolds before our eyes. The suspense is in how close the TGA will get to zero – the moment when the government begins defaulting on its bills – before Congress raises the debt ceiling.

But the ending of the farce is already known. Congress will avert default more or less at the last minute, as it has done 78 times without fail since 1960, after everyone got through extorting concessions from the other side.

It’s a farce because Congress appropriated the funds to be spent and to be borrowed, and told the Administration in detail how to spend those funds, including on all the pork-barrel spending for each member of Congress, and then Congress said: No, you cannot borrow the money we told you to spend.

It’s nuts, and foreigners look at this farce with befuddled amusement as one of the quirks that the crazy Americans invented as part of their messy politics.

However, the debt ceiling never ever reduces deficit spending. That’s decided by Congress. But it temporarily limits new borrowing until Congress decides that it’s time to raise the debt ceiling again.

If Congress doesn’t raise the debt ceiling in time, the US government would begin to default on its bills, and financial markets around the world would have a hissy-fit of historic proportions, and every member of…

Market Rally Runs Up To Key Test; Here’s What To Do Now