Hamas has rejected a message sent by Israel via Egyptian mediators calling to prevent a further escalation of violence and a potential deterioration into a wide-ranging conflict, a Lebanese newspaper reported on Saturday.

According to the report in the Al-Akhbar daily, widely considered a mouthpiece for Hezbollah, Israel sent the message to Hamas through the Egyptian mediators who have held talks with officials from the terror group over the past two days.

However, according to the report cited by the Kan public broadcaster, Hamas responded that “events on the ground” showed that Israel does not wish for a de-escalation and that therefore a truce between the sides was unlikely in the near future.

A separate report in the Palestinian Al-Quds newspaper, also cited by Kan, said that Palestinian factions in the Hamas-controlled Gaza Strip were planning to reactivate the so-called “nightly confusion units” which riot along the security fence. 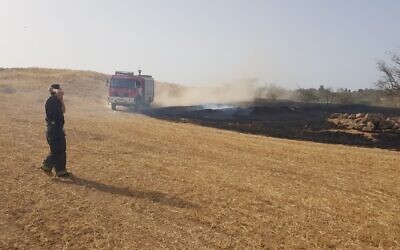 The riot units would be in addition to the uptick in balloon-borne incendiary devices launched from the Strip — recent days have seen over a dozen fires sparked in the Gaza border area.

Palestinians in the Gaza Strip and Arab Israelis were expected to hold mass protests on Saturday in the wake of the violence.

The Hamas terror group’s official media outlet said Gaza-based groups were calling for demonstrations near the border fence with Israel on Saturday in protest of Israeli actions in Jerusalem.

Hamas leader Ismael Haniyeh said that Israel would “pay a price” for the clashes at the Al-Aqsa Mosque, one of Islam’s holiest sites. The hilltop on which it sits is the holiest place in the world for Jews as the site of the two biblical temples — making it a flashpoint for nationalist sentiment and violence between Israelis and Palestinians.

“We tell [Israeli Prime Minister Benjamin] Netanyahu: don’t play with fire. This is a battle that you cannot win. Israeli arrogance and tyranny will be smashed on the stones of the Al-Aqsa Mosque,” Haniyeh said. 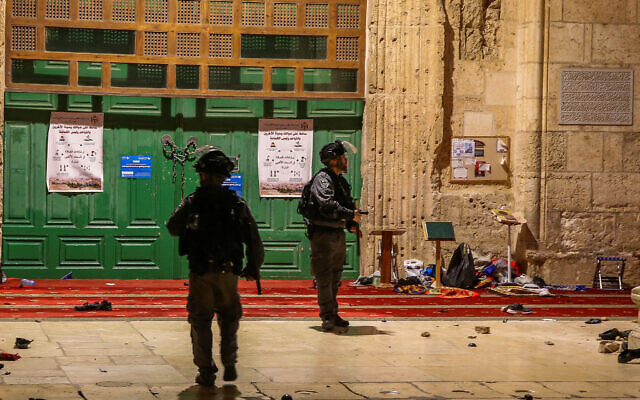 Israeli riot police at the Al-Aqsa mosque in Jerusalem’s Old City on May 7, 2021 (Jamal Awad/Flash90)

The Arab High Follow-Up Committee, a body that represents Arab Israelis, called for protests in Arab towns and cities across the country in response to the violence.

Red Sox are suddenly on the playoff brink: ‘That f–king sucked’