WASHINGTON (AP) — President Joe Biden set about convincing America it needs his $2.3 trillion infrastructure plan on Thursday, deputizing a five-member “jobs Cabinet” to help in the effort. But the enormity of his task was clear as Senate Minority Leader Mitch McConnell’s vowed to oppose the plan “every step of the way.”

Speaking in Kentucky, McConnell said he personally likes Biden and they’ve been friends a long time. But the president will get no cooperation from the GOP, which objects to the corporate tax increases in the plan and says they would hurt America’s ability to compete in a global economy.

“We have some big philosophical differences, and that’s going to make it more and more difficult for us to reach bipartisan agreements,” the Republican leader said. 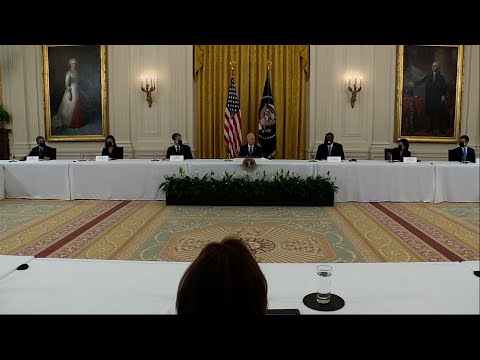 “We kind of think it’s just right,” Klain said in a televised interview with the news organization Politico. “But we’re happy to have a conversation with people, less about the price tag, more about what are the elements that should be in the plan that people think are missing.”

Those conversations could be limited to Democrats as McConnell declared: “I’m going to fight them every step of the way.”

“Working with my team here at the White House, each Cabinet member will represent me in dealings with Congress, engage the public in selling the plan and help organize the details as we refine it and move forward,” Biden said.

The task will involve lots of salesmanship for a legacy-making piece of legislation that Biden announced in a Wednesday speech.

His administration must sway Congress. It needs to rally voters. It’s also looking to outside economists to back the plan.

It’s monitoring Wall Street for any celebrations or jitters. It’s forming alliances with advocates, while dealing with critics of the plan’s corporate tax hikes and project details. And Biden’s administration also intends, per the plan, to cajole other nations to stop slashing their own tax rates in what has been a race-to-the-bottom to attract and retain multinational businesses.

Within Washington and corporate board rooms, the administration is attracting its share of accolades and rebukes on his proposal.

In Biden’s own party,…

As Biden touts gas tax pause, even some of his own officials balk

Rodgers: Nice to get ‘trolls off our back’ for a week