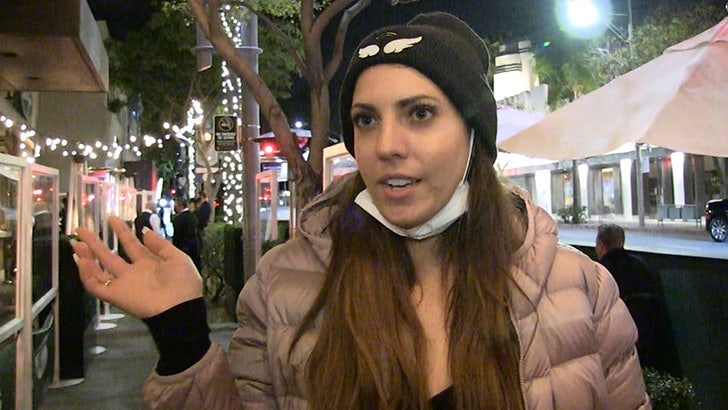 A friend of ‘Bachelor’ Matt James body-shamed one of his contestants — Victoria Larson — but she doesn’t really seem to care all that much … if anything, she’s almost excusing it.

We got Victoria Friday night in Bev Hills and asked her about Matt’s golfing buddy making a remark about her body in a surfaced clip that was apparently shot after his season wrapped. The guy’s name is Jerry, and he seemed to be trying to distract Matt.

Shortly after the clip was posted, Victoria wrote … “Cute… I love my body :)” and later posted a body shot of herself in a bikini, to silence the haters. Plus, she threw up a meme of men commenting on beautiful women’s bodies … almost as commentary.

As fired up as she seemed at the time, Victoria was NOT nearly as enthusiastic to shut down the body-shaming in our clip … like we said, she almost chalked it up to “boys will be boys” or “locker-room talk.” She didn’t use those words exactly, but the sentiment was there.

Watch for yourself … she tells us she actually doesn’t think it was Jerry — the dude who made the comment — who shamed her, and she gets that in a competitive environment, sometimes you say things to throw your opponent off. Hmmm … okay.

She went on to write off all the talk of it as “noise” … and when we asked if she hoped Matt himself had learned his lesson, and if the franchise would try to get more inclusive … Victoria was careful not to cast a stone, actually praising Matt and dodging the question.

It’s interesting … Matt was silent in the moment when his buddy made the body comment about Victoria, but was later quick to condemn it during an appearance on “The Real.” He said he needed to surround himself with better friends, but he didn’t seem all that bothered by it in real-time.