Following on the heels of high-profile stock split announcements from high-flyers like Tesla (TSLA) and Apple (AAPL), Amazon (AMZN) is likely to be the next big company to be a “splitter” as its stock is considerably higher than either Tesla or Apple was on a pre-split basis.

Investors know that a stock split doesn’t add value on an economic basis because the following are equivalent:

Or, as someone recently said: “If you gave me five singles for a $5 bill, I’m no better off.”

However, one can argue that stock splits do provide a psychological lift and may, during the new Robinhood era, make a “cheaper” stock more accessible to small retail investors. One only needs to look at the action in the stock charts of Tesla and Apple to support that opinion: 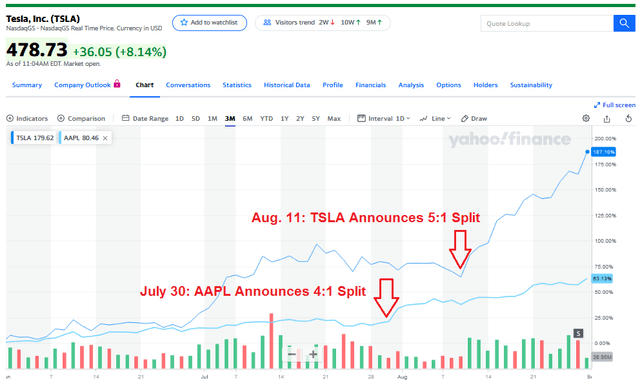 Source: Yahoo Finance (notes in red by the author)

Apple was trading at $384 on July 30, the day its 4:1 stock split was announced. Apple has risen ~35% since the split announcement.

Currently trading at $3478/share, one could argue that Amazon is much more in need of a split as compared to either Tesla or Apple was. After all, Amazon has only split its stock three times, all back in the late 1990s: 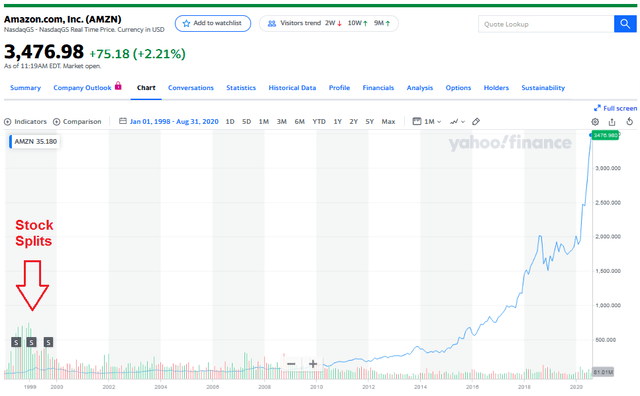 Source: Yahoo Finance (notes in red by the author)

The previous splits were:

Surprisingly, Amazon hasn’t split the stock once in the 2000’s. As a result – as can be seen by the chart above – the average daily trading volume has receded as the stock price has dramatically risen.

I’ve checked the last four conference calls, and there has been no discussion of a split as far as I can see. While Amazon would seem to be a solid choice to add to the DJIA, as we saw from Apple’s stock split affect, high-priced stocks can cause a lot of turbulence to the DJIA. If Jeff Bezos has any desire to be in the DJIA, he’ll have to split the stock in order to get the price down to a level that can be more easily managed by the index.

Regardless of a split (or no-split), stock splits should not be an investment thesis for any company, and it isn’t for Amazon: it’s the fundamentals and financial performance that are the basis for investing in the company.

Highlights in Amazon’s most recent Q2 EPS report were: 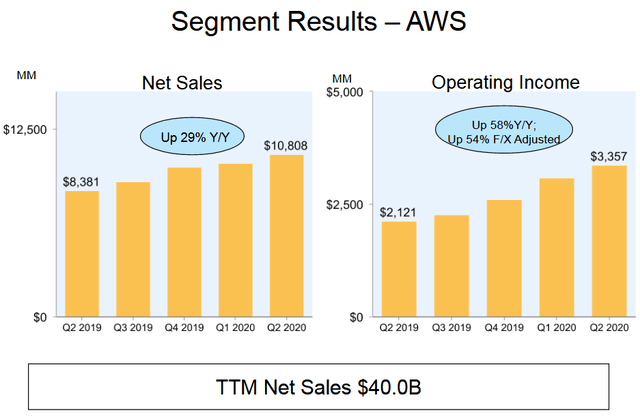 Why Retailers Are Fighting a Vaccine Mandate Before the Holidays

Will the Mets win the NL East? Are the Yankees still a contender? We debate Subway