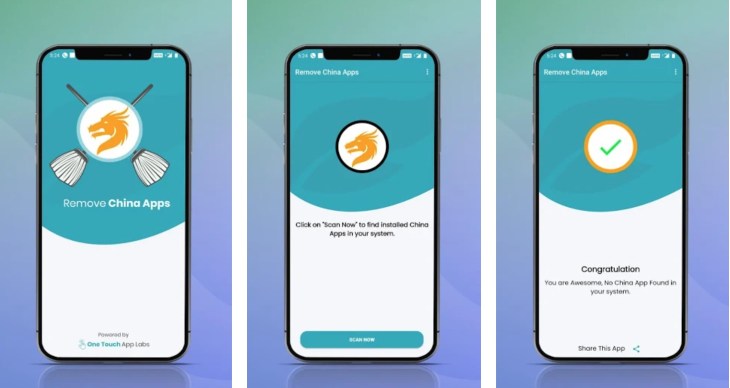 Remove China Apps, an app that gained popularity in India in recent weeks and did exactly what its name suggests, has been pulled from the Play Store.

The top trending app in India, which was downloaded more than 5 million times since late May and enabled users to detect and easily delete apps developed by Chinese firms, was pulled from Android’s marquee app store for violating Google Play Store’s Deceptive Behaviour Policy, TechCrunch has learned.

Under this policy an app on Google Play Store cannot make changes to a user’s device settings, or features outside of the app without the user’s knowledge and consent, and not it can encourage or incentivize users into removing or disabling third-party apps.

The app, developed by Indian firm OneTouch AppLabs, gained popularity in India in part because of a growing anti-China sentiment among many citizens as tension between the world’s two most populous nations has escalated in recent days over a Himalayan border dispute.

Several Indian celebrities in recent days have backed the idea of deleting Chinese apps. Yoga guru Baba Ramdev tweeted a video over the weekend that showed him deleting several apps that had affiliation with China.

Responding to a tweet from an Indian actor deleting TikTok from his phone, Nupur Sharma, a spokeswoman for India’s ruling party BJP, said it was “great to see concerned citizens setting an example” and “we ought to hit them where it hurts most.”

Citing an industry source, Chinese state-run Global Times news outlet reported on Tuesday that if the Indian government allows the “irrational anti-China sentiment” to continue it risks ruining bilateral relations that is “likely to draw tit-for-tat punishment from Beijing.”

The report added that some users in China ridiculed Remove China Apps and urged Indians to “throw away” their smartphones, referring to Chinese smartphone makers’ dominance in India’s smartphone market.

If the sentiment from India persists, it could mean bad news for several Chinese firms such as ByteDance and UC Browser that count India as their biggest overseas market. TikTok, which weeks ago was grappling with content moderation efforts in India, sparked a new debate over the weekend after a popular creator claimed that a video she posted on TikTok was pulled by the Chinese firm.

The video was critical of the Chinese government, she said. In a statement to TechCrunch, a TikTok spokesperson said the platform welcomes diversity of users and viewpoints and said it had implemented a more rigorous review process and reinstated the video.

In April, India amended its foreign direct investment policy to enforce tougher scrutiny on Chinese investors looking to cut checks to firms in the world’s second largest internet market. New Delhi, which maintains a similar stand for investors from several other neighboring nations, said the measure was introduced to “curb the opportunistic takeover” of Indian firms going through distress because of the global pandemic.

Mariners consider the possibility of simply continuing to win, win

‘Heck of a ride’: SpaceX’s historic amateur astronauts splash down safely in Atlantic

Elizabeth Holmes trial: What you should know as the jury begins deliberations